Find out how Toyota Motor Philippines dealerships across the

Toyota Dealers Give Back

It is no question that the pandemic affected everyone, including the people of Toyota Motor Philippines’ dealerships nationwide. Each of them has made steps and complied with measures to adjust to life under community quarantine.

Although quarantine guidelines are slowly being adjusted, major changes still had to be made to keep operations going at local dealerships. Changes such as social distancing, strict implementation of sanitation guidelines, and limiting of people inside the showrooms were enforced, for the safety not only of the staff, but also of the customers. It is far from the normal that we all know, but each one is doing their part.

As Richmond Glenn So, General Manager of Toyota La Union said, “Just being able to go back to work is a blessing given that a lot of people lost their jobs, and more are expected to lose theirs. There are a lot of business practices and etiquette that we cannot do right now because of social distancing. But we consistently remind ourselves that all the decisions we make moving forward will impact the security and safety of our customers, our team members, and our families.”

As important as the quick response to unpredictable situations such as this is preparedness. Cosco Oben, President of the Oben Group which handles several dealerships like Toyota Balintawak, North EDSA, and Marilao, has silently prepared for the coming crisis.

"Our Oben Group Crisis Management Team saw this coming and had planned different schemes even prior to the quarantine declaration,” said Oben. "We had to think beyond the box to make business continuity possible despite full stoppage of onsite operations in order to help our financially-challenged Team Members during the quarantine period.”

Don Andrada, General Manager of Toyota Plaridel Bulacan meanwhile shared, “Coping with the pandemic may be described as flying the plane while building it.” He related how planning required consideration of both national and local government regulations, public safety, and
the challenge of working around limited public transportation options for personnel.

But the biggest challenge was the emotional one. “We have been quite busy, with meetings called by our President Mr. Robert Uy, on suggestions and the need to brain storm what to do during the ECQ for the team,” Mary Jane Uy, VP for Finance and Administration at Toyota
Iloilo said. She cited the uncertainty and fear surrounding the situation as a great test of patience and spirit.

Holding down the Fort

Amidst the uncertainties and the challenges, the spirit of unity and being one team and family persevered. Health and safety has become the priority. When the quarantine was partially lifted, only select employees physically reported for work to comply with LGU regulations.
Personal Protective Equipment, such as masks, gloves and even face shields, were mandated for all on-site personnel.

And this was not only for the benefit of employees. “The full implementation of Dealer Safety Guidelines,” said Andrada, “has the end goal of protecting our customers.”

Most meetings during quarantine were held online, but for those that weren’t, strict social distancing and PPE protocols were followed, and areas were sanitized afterwards. A culture of hygiene was developed.

Daily health checks monitored the safety of everyone, while periodic health follow-ups and texts and calls were made to team members who had to stay home.

“We encouraged our team members to attend relevant webinars,” said Oben. To keep teamwork and camaraderie strong despite the distance, they also facilitated online engagement activities and games, as well as daily ‘Kamustahan’ via online platforms.

Those who were hardest hit by the quarantine received financial support and food supplies from their co-workers, thanks to everyone’s ‘Bayanihan’ spirit. Helping one another helped keep morale up, but the greater boost to morale has been through helping communities in need.

In both big and small ways, dealers and employees gave back to their communities throughout the crisis, in the spirit of ‘Malasakit.’ Concern for the health and safety of frontliners was foremost on the mind of dealer principals.

Toyota Marilao and Toyota Balintawak lent out service units directly to affected frontliners. Other dealerships lent units to local government units. Toyota Negros Occidental assigned an Innova unit to a COVID center in Bacolod City. Sister dealership Toyota Roxas City, on the other hand, gave its own Innova service unit as a donation to the Office of the Mayor.

Toyota Iloilo, on the other hand, donated hazmat suits, PPEs, and gallons of alcohol and disinfectant to COVID centers such as the West Visayas Sanitarium, as well as to local government offices, along with food and relief goods.

Food was a pressing problem for communities affected by COVID-19. Toyota Plaridel donated three hundred thousand pesos to the “Sagip Plarideleño” drive, which aided in the purchase of rice and canned goods for affected families.

Many dealerships donated sacks of rice and canned goods throughout the crisis, with some of the donations coming from the employees themselves. But it was in the packing and giving of relief goods that employees found the most fulfillment. It allowed them to touch base with their adopted communities. Often working deep into the night or walking under the hot sun, the program became a humbling experience.

The community service programs were often a joint effort between dealers and the local government, which helped identify the neediest and hardest hit to pinpoint where relief efforts would do the most good. In some cases, the dealers also took the initiative to survey their communities.

“We planned the timing of the release of the relief packs we distributed in the communities we identified.” said So, “We did surveys on how well the community is doing and how much days of food supply is left.” This allowed them to deploy their donations to maximum effect.

The smiles on the faces of those who received assistance, as well as the messages of thanks and acknowledgement that filtered in through social media, lifted the spirits of the employees greatly. Even if the drives were not publicly advertised, messages of thanks still came in,providing the motivation and drive to continue on in the face of the crisis.

“These words of appreciation “made us thankful to be a part of this company,” said Uy.

For Andrada, the efforts were all about social responsibility – both of the company, and the individuals. To share in the simplest but most meaningful way is a philosophy many of the people in their team took to heart.

So meanwhile appreciated how the cycle of good deeds and kindness tend to go around. “I was so blessed to hear that team members who had excess because their families were smaller shared with their neighbors who were in need that time,” he said.

The quarantine may be easing up, but challenges still remain. At-risk employees with health conditions continue to work from home, while the rest of the teams ready themselves for the resumption of business under the ‘New Normal.’ And as the country move forward from the pandemic, our dealers are finding new avenues to channel the spirit of ‘Bayanihan,’ reaching out in ways big and small, and trying, however possible, to impart that spirit to others.

“Our first priority is to ensure the emotional resilience, physical safety and health and financial wellness of our Team Members,” said Oben. “We will try our best to give back to them whatever they lost during ECQ, while vigorously engaging them in emotional toughness and safety and health programs, because we need healthy, safe and happy Team Members in order to make our Customers happy as well.”

So meanwhile intends to keep the lessons learned from the pandemic, for the sake of the future generation.

“If we are to undergo another pandemic in the future, we need the next generation to be prepared to handle it, no matter what responsibility is entrusted to them,” he said.

Through community service programs and its various activities to help those in need, Toyota’s dealership network is making its mark in history and passing on the values of Malasakit, Bayanihan and Unity to the next generation of Filipinos. 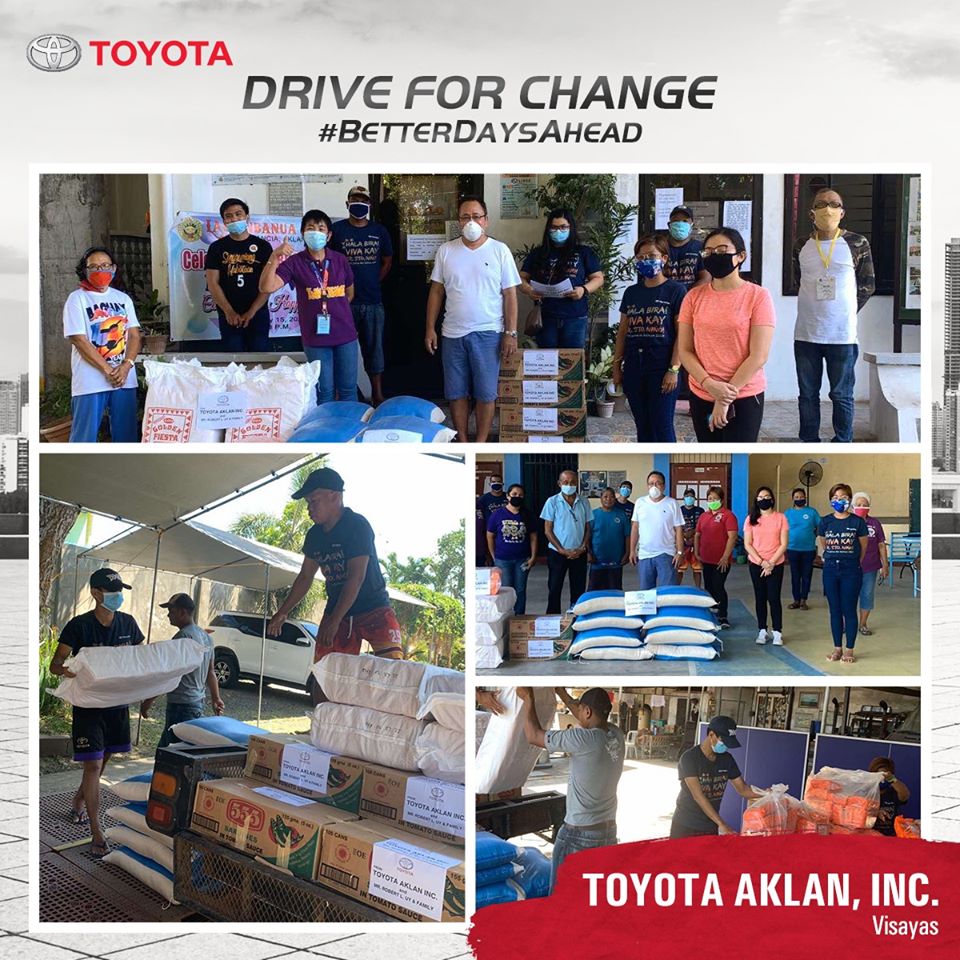 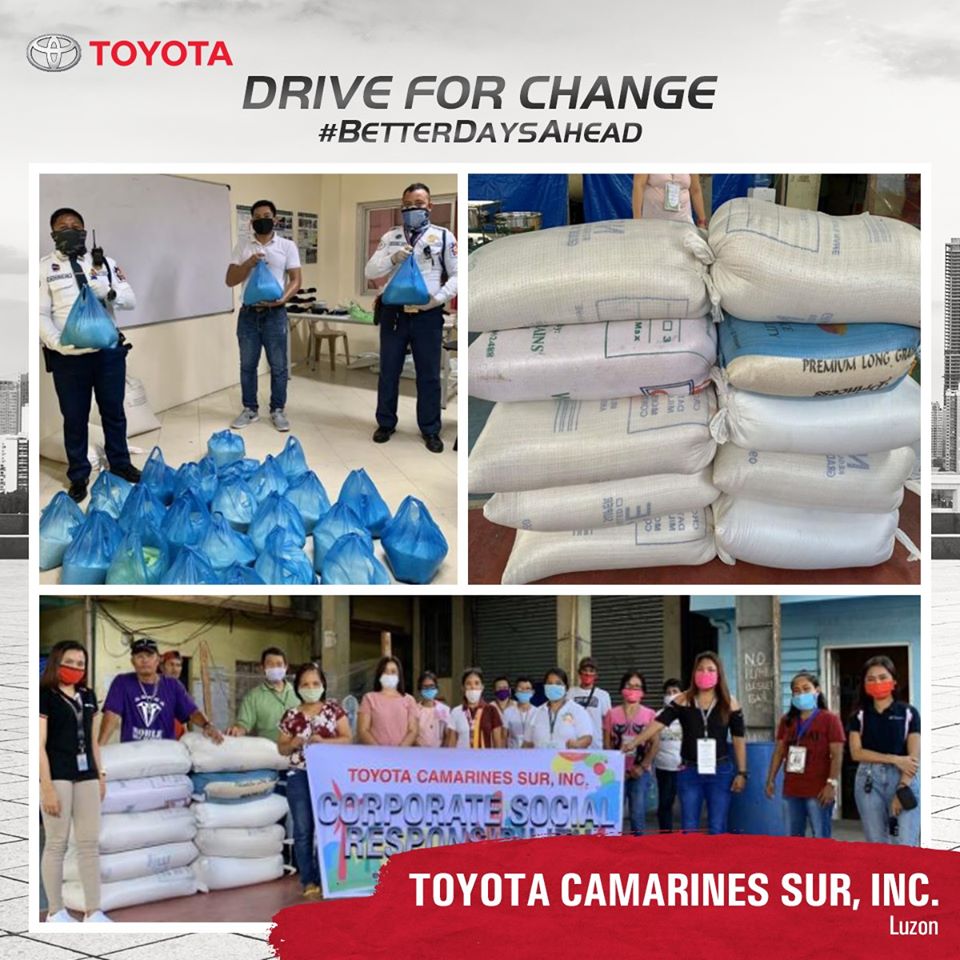 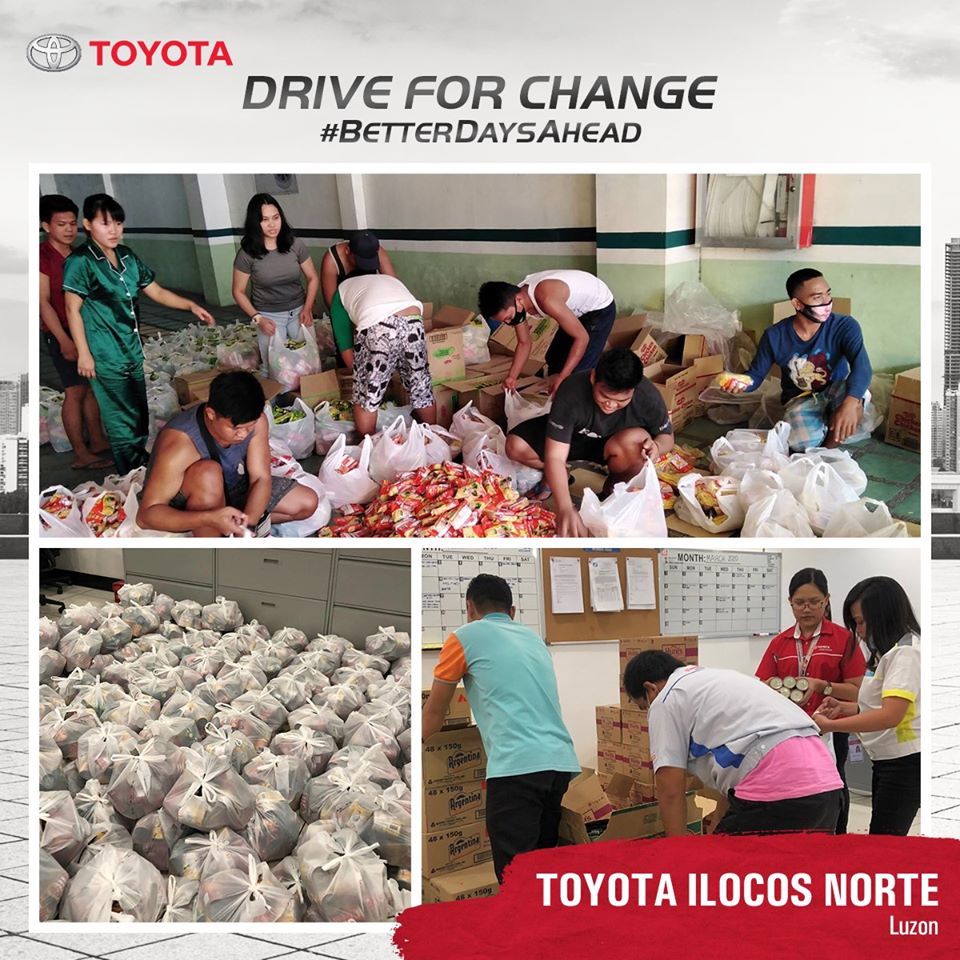 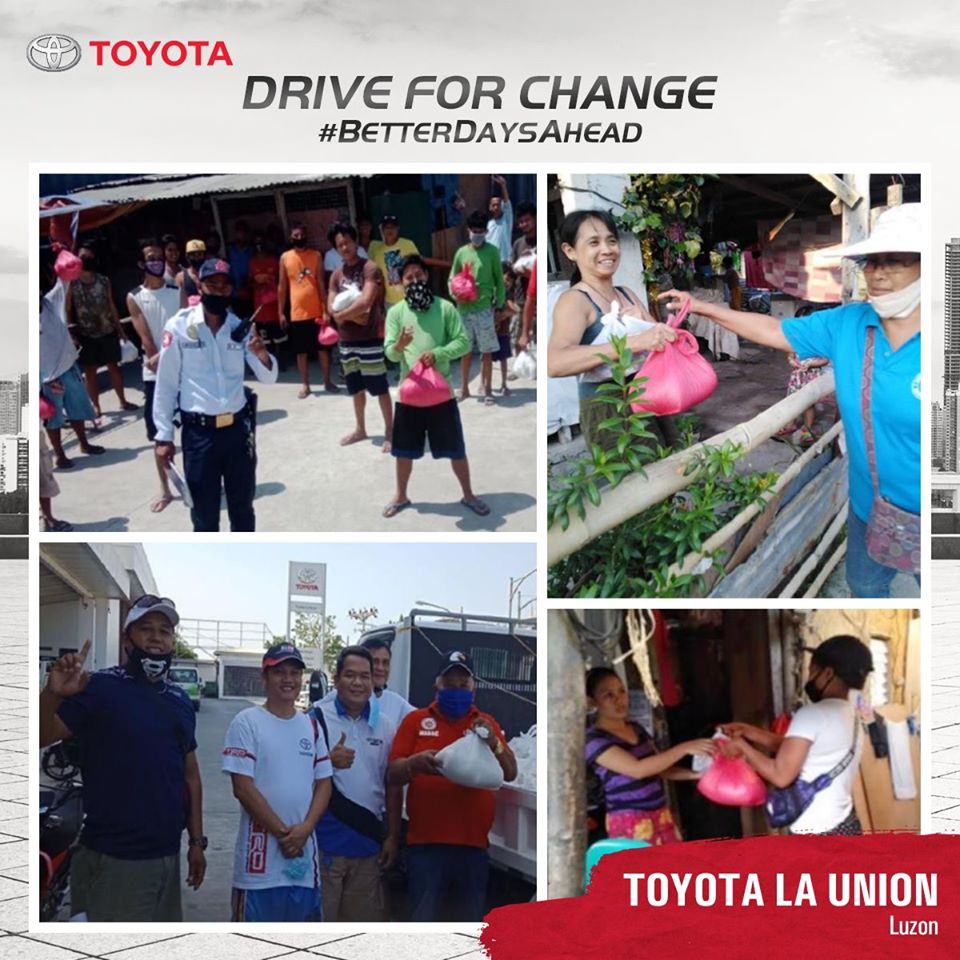 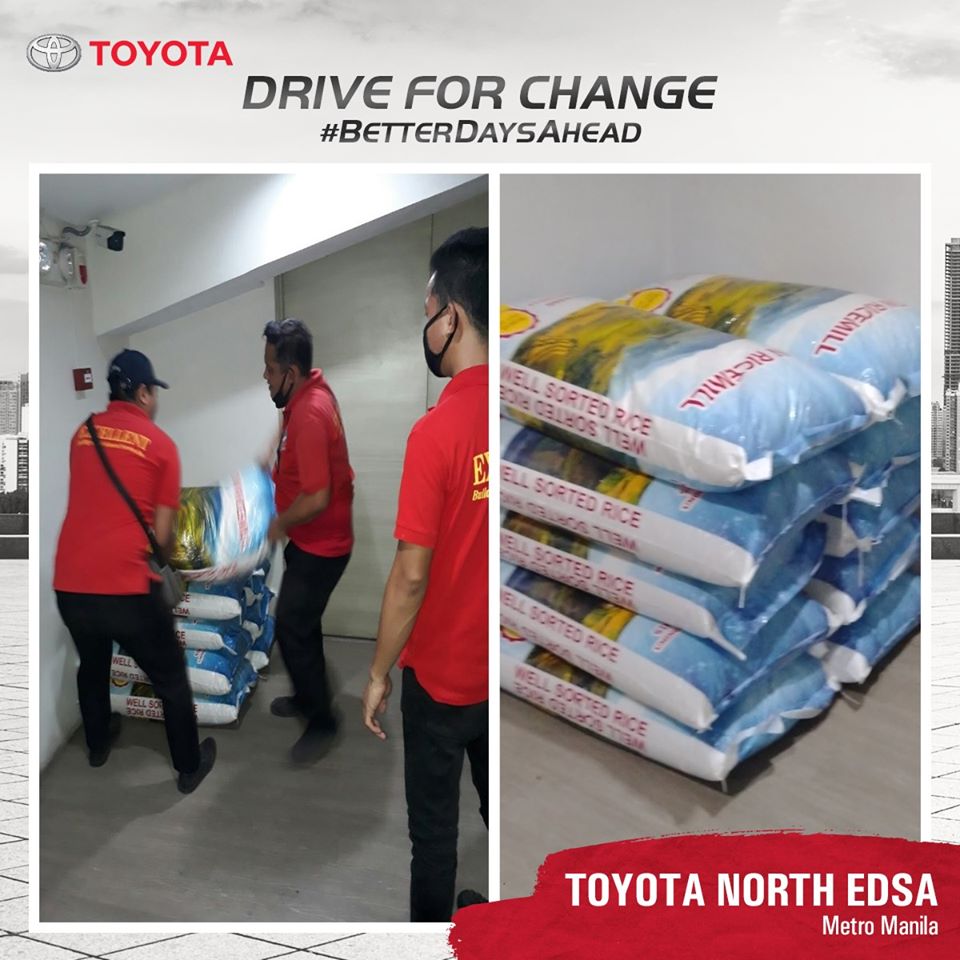 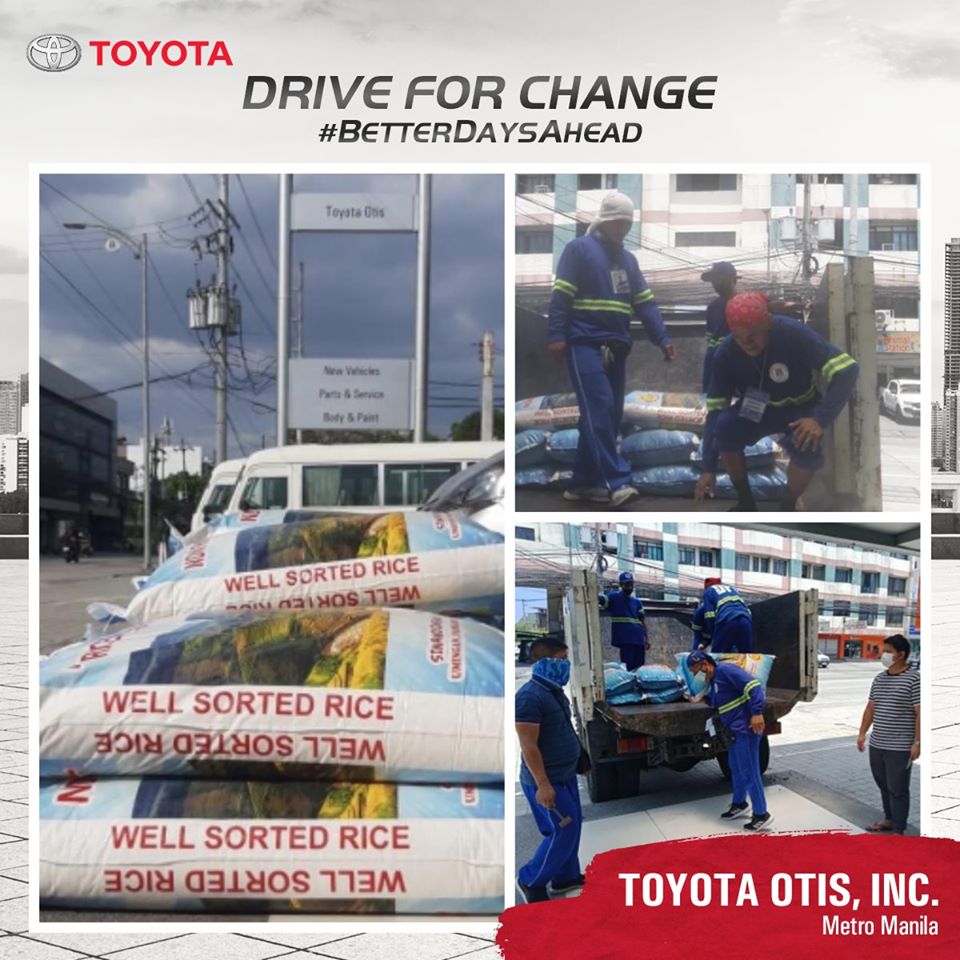 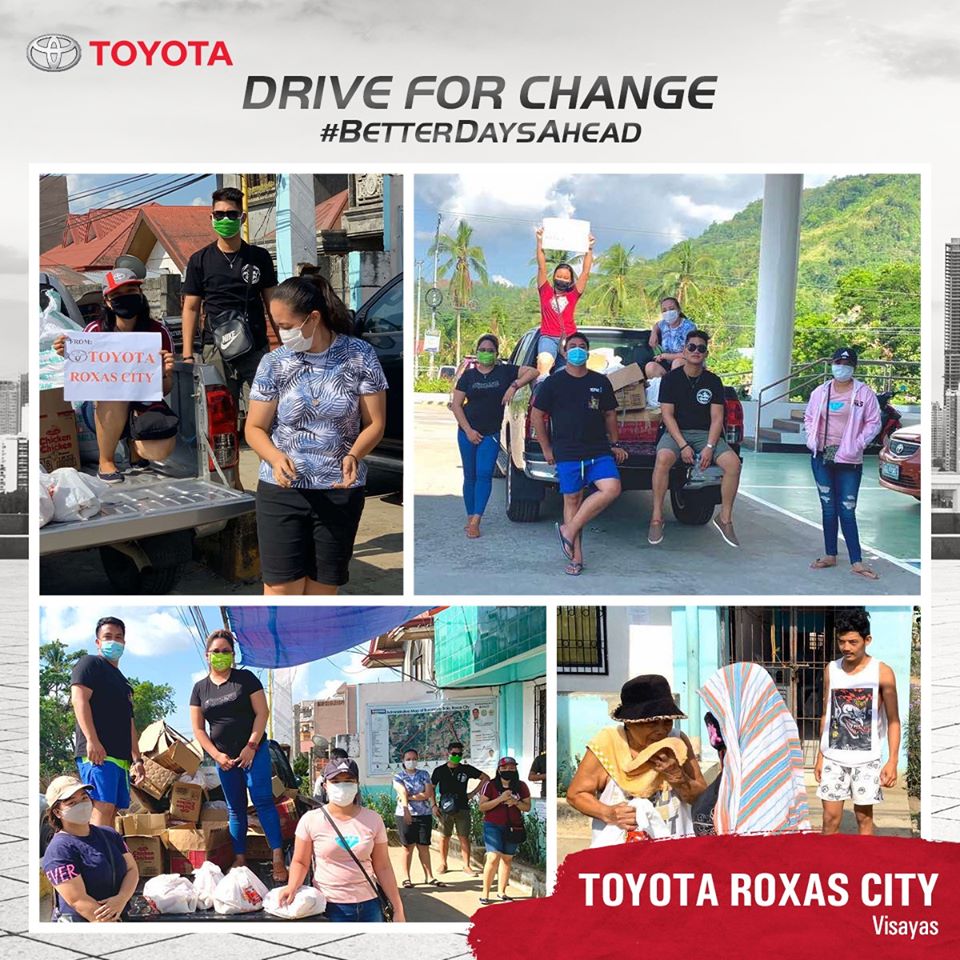 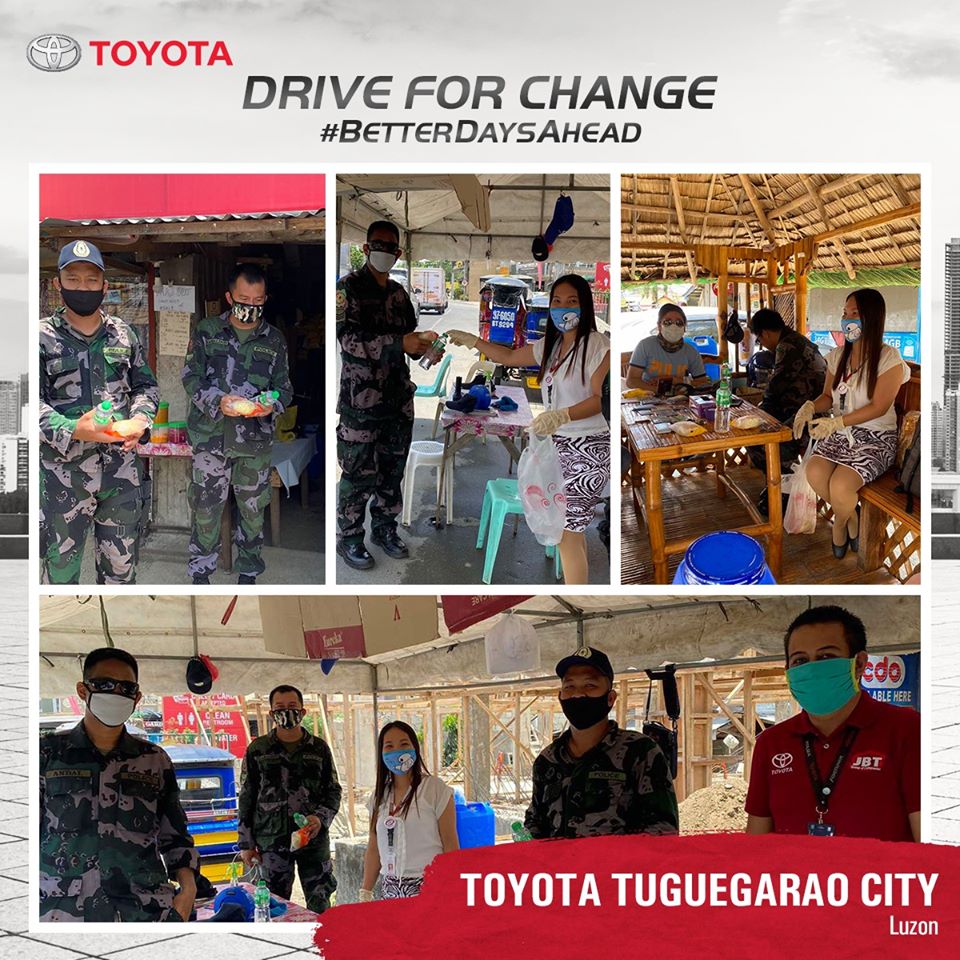