Racers from around the nation have gathered this year for the 2021 TOYOTA GAZOO Racing GT Cup organized by TOYOTA GAZOO Racing and hosted by Toyota Motor Philippines. For the first round of the competition, potential overall champions are already starting to etch their name up on the board.

The first leg brings the virtual racers to the historic Autodromo Nazionale di Monza which is located north of Milan, Italy. It’s the third oldest circuit in the world with close to 5.8 kilometers in length. It features 11 turns in which some are chicanes or artificial curvatures of the road, which gives the racers more challenges coming from a long stretch for as long as 938 meters of asphalt. Even for an ongoing quarantine, we are transported to just some of the best views in the world right in the comfort of our own home.

The first day covered the qualifying races for the Junior Class (players 17 years old and below), promotional (non-professional), and sporting (with professional e-sports experience.) And the results deserve a following as they eventually showed their skills and talents early in the cup.

Racers of the Junior class may be young but their performance on the digital circuit proves otherwise. The Monza tracks seemed like a playground where the young challengers happily traded places in the leaderboard, Waku Doki style. Claiming the top spot of the category is Russel Cabrera who has successfully maintained his lead until the last minute of the race, denying any change of position lap after lap. Following him is Josh David Marquez who also achieved the best time of the race at 2:02.5. And at the third step on the podium is John Paul Veloso who did not give up on securing that spot finding every opportunity to overtake at the chicanes. 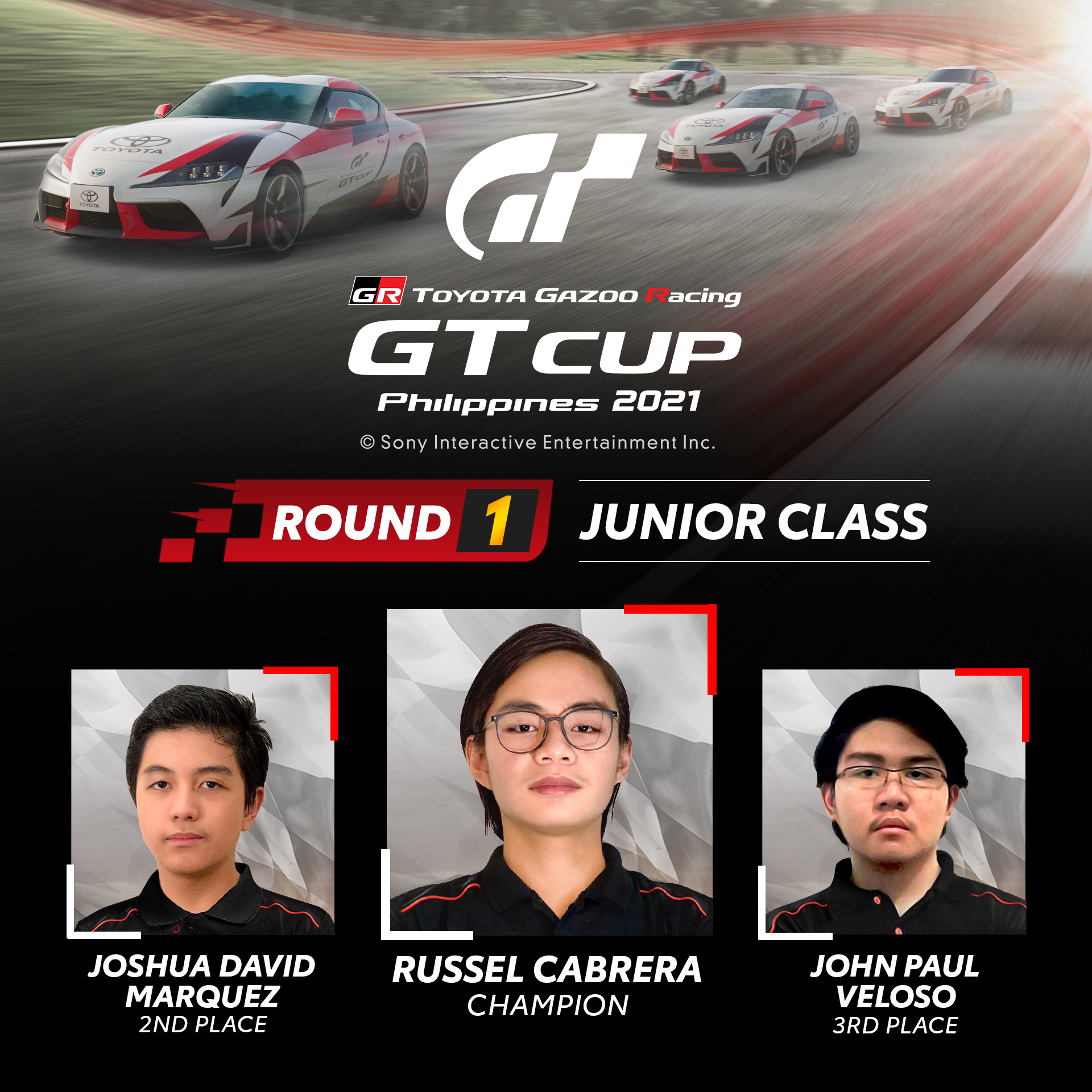 The second day of the event started with the heat race of the Promotional Class. Taking things to a higher octane, the players who have no professional e-sports experience are yet showing potential wins if they are to play in the pro leagues. Calmly savoring the checkered flag is Jether Miole who persistently defended his lead widening the gap from the competitors from a quarter to almost half a second leading to a home stretch. It was a mirror-to-mirror battle as the top players from this category keep their vehicles on the lane towards victory.

Finally, the spotlights are focused on the seasoned players in the Sporting Category where most of the participants are representing their own e-sports team. Returning racer Terrence Lallave made sure he came back with shock and awe claiming the number 1 position. Adamantly chasing him in second place is Luis Moreno who floored the metal to reduce the gap and taking advantage of the slipstream. Climbing in the 3rd spot is Estefano Rivera who have also challenged real life tracks in the recent Vios Cup. 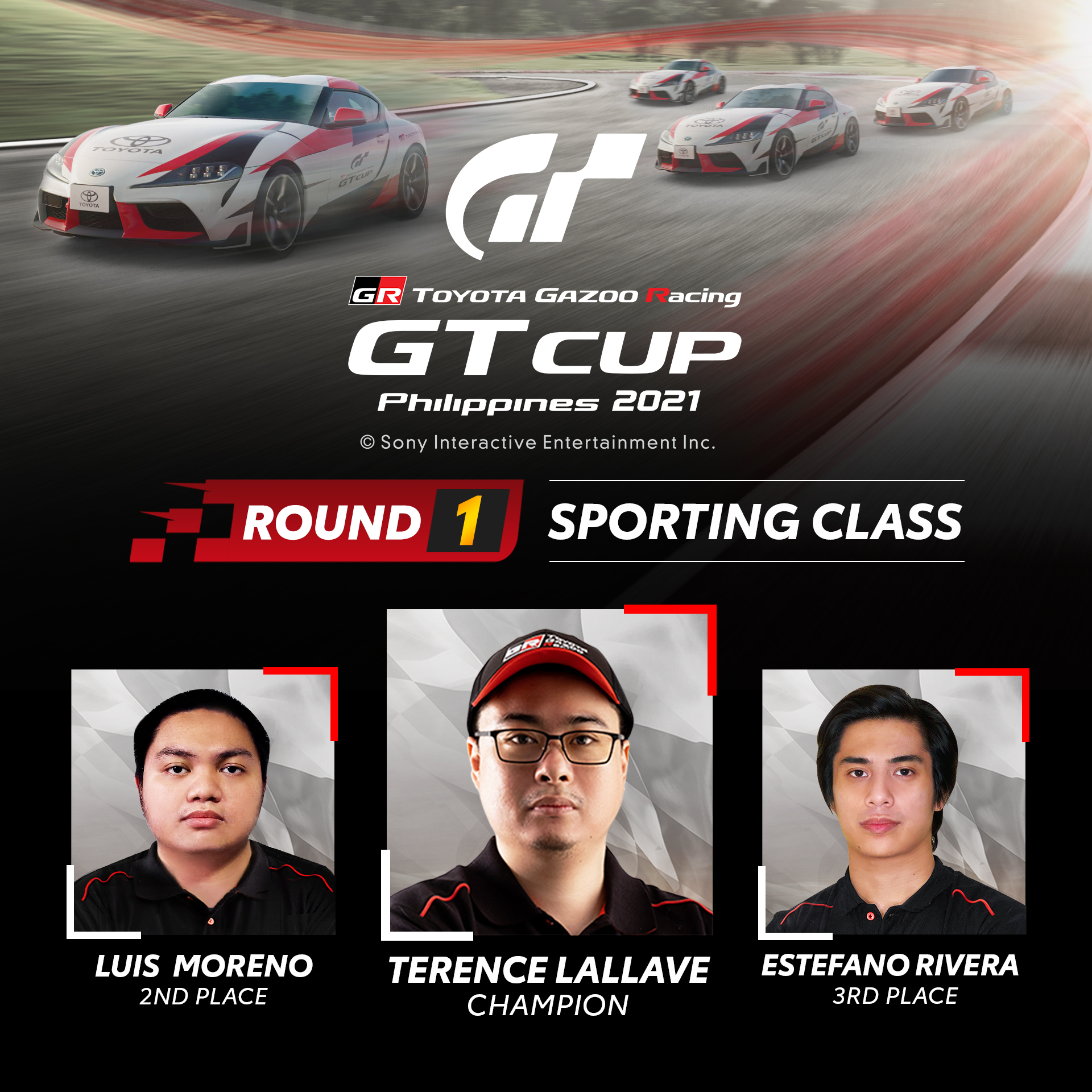 The champions of this round get to take home exciting gaming gears that are sure to upgrade their arsenal. Bigger and better rewards await winning racers of the upcoming round. Especially that the kicker for the 2nd leg will be the application of multipliers. Scores accumulated by the racers will be multiplied by 1.5 which means the champion of the round gets 30 points instead of the initial 20. On top of that are prizes including coveted digital devices and gadgets. With higher stakes, racers are encouraged to join and re-qualify to get more chances of increasing points. Interested participants can still register for the 2nd leg by signing-up on the official Toyota GR GT Cup website (toyota.com.ph/gtcup).

Fans and enthusiasts of the race should bookmark the official Facebook page of Toyota Motor Philippines (facebook.com/ToyotaMotorPhilippines) to be notified of live streams. You can also visit toyota.com.ph to view the Vios GR-S and the GR Yaris and learn how you can own one now. To learn more about Gazoo Racing, their innovations and engineering, follow TOYOTA GAZOO Racing Philippines on Facebook.