Why The Supra Has Such a Strong and Devoted Following

After two decades of waiting, the wish of Toyota Supra fans was granted with the release of the Toyota GR Supra. The GR in “GR Supra” stands for “GAZOO Racing” which embodies Toyota’s commitment to overcoming every limit to make “ever-better” cars. TOYOTA GAZOO Racing is active in motorsports around the world. It takes the experiences gained in years of racing and its deep passion for cars and pours it all into the GR sports car brand. The GR brand is all about the fun of driving, and the GR Supra is the perfect embodiment of this philosophy.

The sports car rejoins Toyota’s diverse vehicle lineup and immediately stands out. With its sporty exterior, sleek lines, 19-inch forged aluminum wheels, sharp looking headlights, it’s a ride that not only demands a double-take, but also displays automobile design and engineering at its finest. With 8 metallic colorways to choose from–that include Silver Metallic 5, Ice Gray Metallic, and Lightning Yellow–you know that having a Supra in your garage also undeniably means owning precious art.

Of course, the true test of any car is how it drives. So how well does the Toyota GR Supra handle itself on the road? We asked new and aspiring owners who have spent ample time behind the Supra’s wheel to share their impressions.

Under the hood of the Toyota GR-Supra is a 3-liter, in-line 6-cylinder, Twin-Scroll Turbocharged engine that’s mated to an 8-speed Automatic Transmission. It has a maximum output of 335 horsepower and 500 Nm of torque. Translation: It gives the driver undeniable control to add fun on an open drive. 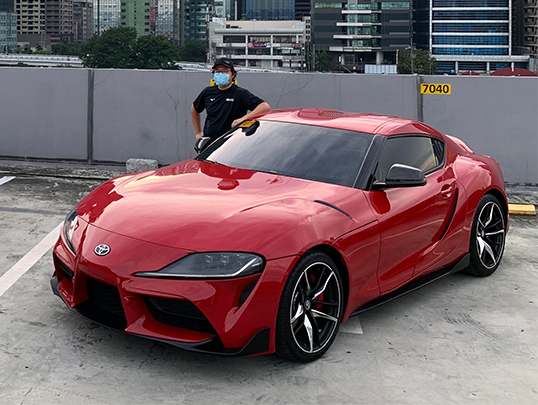 Whether the drive is fast or slow, the Supra remains steady thanks to a plethora of safety features including traction control, vehicle stability control, and ABS.

Those with less experience driving a sports car will not be intimidated by the Supra. The Alcantara Sports Seats with carbon trim are equipped with an 8-power adjust memory and lumbar support which all help for the comfort of the driver. Its 3-spoke leather steering wheel with paddle shifters is easy enough for any driver to handle.

“The Supra has a point and shoot, go-kart feeling that’s like a Toyota 86 but with superpowers. [Inside], there’s just a feeling of lightness,” says Leo Carlo San Juan, an entrepreneur and car tuner who also owns a GR Supra.

How the car sounds while driving changes with the adjustable modes that tweak the engine capacity and power depending on what you choose. This unique feature certainly adds to that exhilarating feeling inside the Supra.

“The sound of the exhaust is the one thing that I am excited about when you are in sports mode–you can hear the pops and bangs, When you want to just cruise along the open roads, just press the button again to keep it silent,” added Tsai.

On the other hand, when you are just cruising along, the entertainment system adds to the immersive feel  of your drive. The head unit is routed to a 12-speaker JBL system lay live tracks from a concert and it’s like being in the arena itself with its crisp and solid sound. And there’s more inside the cabin, too. 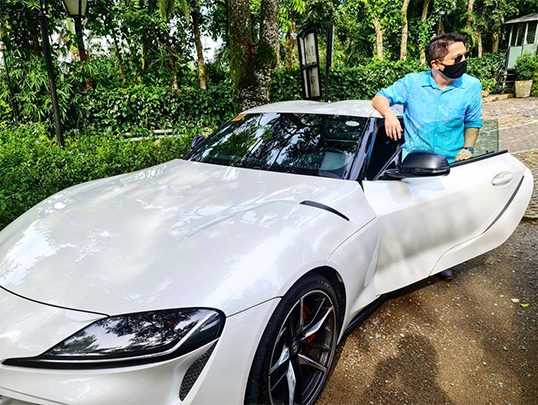 “I really like all the little settings that you can fiddle with in the car. From tire pressure monitors, to exterior lighting of the door handle and step board. I also like how the sports display split-screens with whatever you want to put on the other half–whether it’s the navigation controls or media controls. Even the heads-up display is a thing of beauty,” said Gino Quillamor, a radio anchor and aspiring Supra owner who recently test-drove the car for a week.

Every Bit a Looker

Competing with the Supra’s driving power is its exterior–it looks every bit like a striking sports car. True to its racing roots, the Supra sits low with all the sleekness at the right places.

“What I like about the Supra is the way it looks–the lines and size is just perfect for my taste. From the first time I drove it, it made me feel like I was owning a piece of history,” Tsai added.

The Supra is a class-of-its-own machine of power, torque, and elegance that not only performs well in every capacity and capability but also is undeniably pleasing to the eyes (and ears!). The wheel design, the front bumper and grille, rear spoiler and 2-exhaust pipes enhance the Supra’s sporty look. It’s no surprise then why its owners (along with many other car enthusiasts) continue to sing the super Supra’s praises, loud and proud.

To find out more about the legendary Supra, visit www.toyota.com.ph/Supra or inquire at your local Toyota dealership.