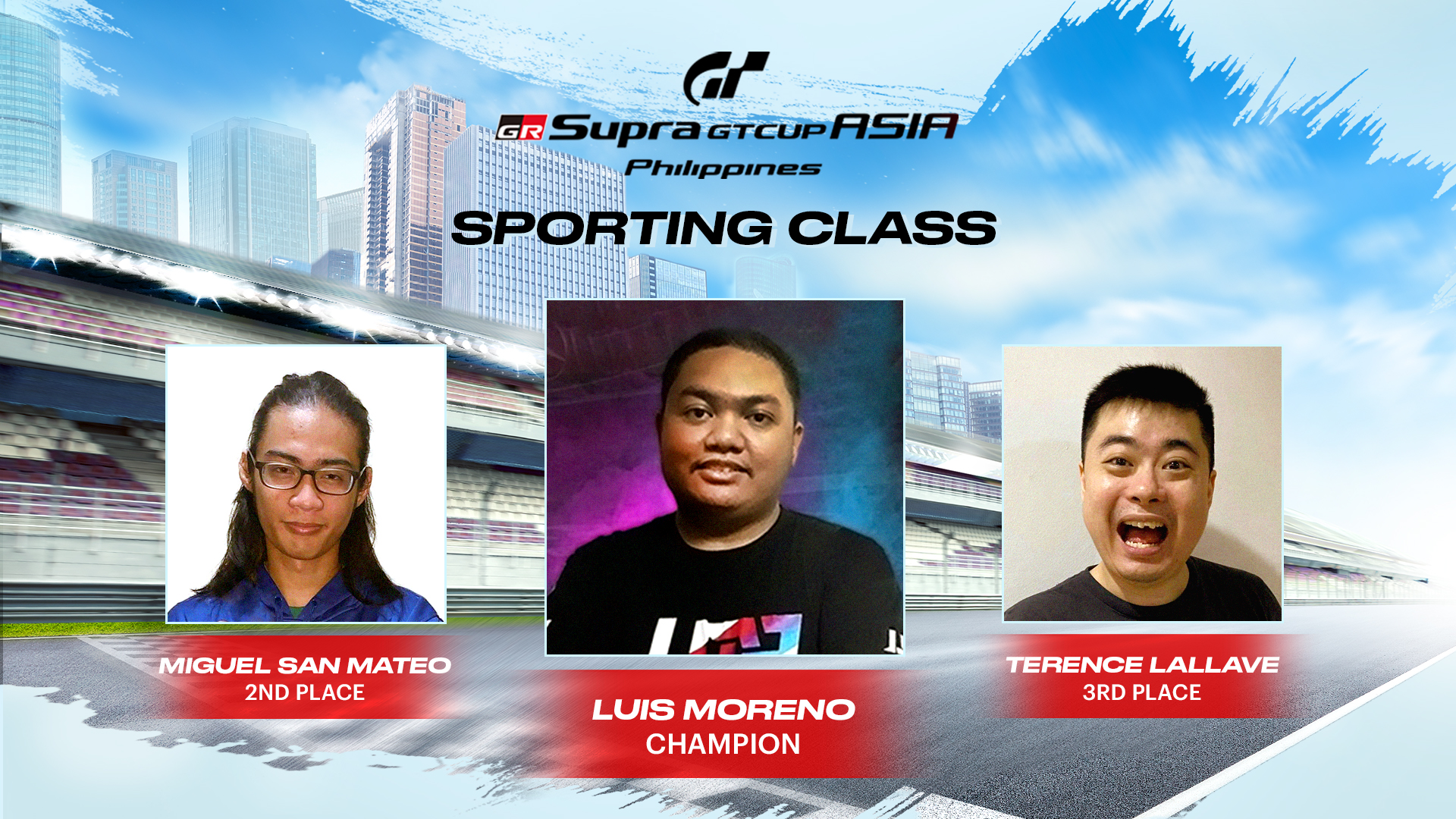 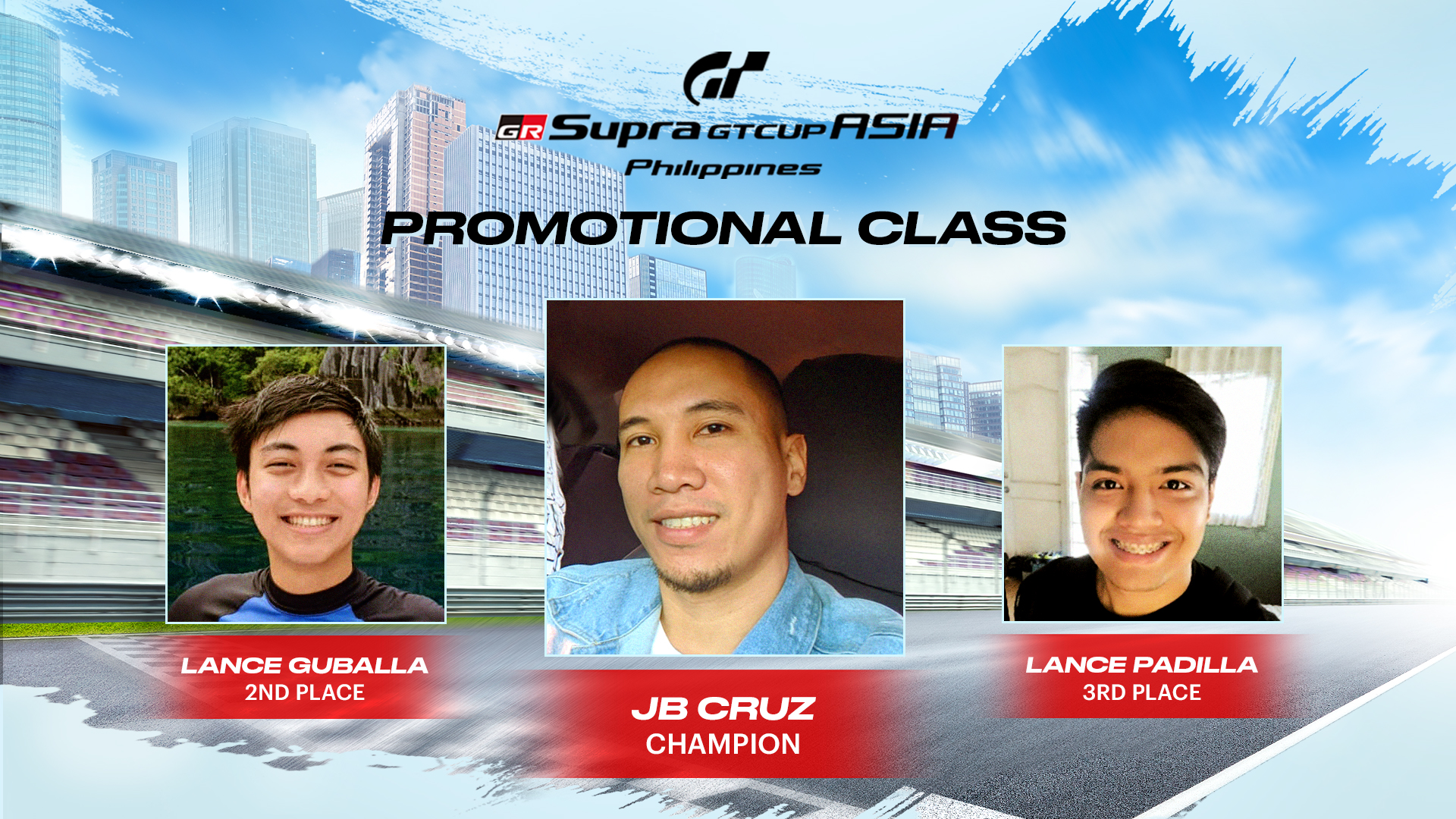 A mix of old and new names filled the winners' list of the second round of Toyota Motor Philippines (TMP)'s national emotorsports program, the GR Supra GT Cup Asia Philippines.

Hundreds of players participated from their own homes, virtually racing Toyota's flagship sports car, the GR Supra, on the tracks of the Autopolis International Racing Course. After the qualifying rounds and the finals heat, TMP has declared the official winners for this round.

Leading the Sporting Class is Luis Moreno who also won during the first round. With him on the podium are second placer Miguel San Mateo and third placer Terence Lallave, both first-time Top 3 finishers.

Round 2 points have a 1.5 multiplier. The third and final round with doubled points will be held this month, to be broadcast on September 26. Registration for the third round is now open at www.toyota.com.ph/gtcup.

Accumulated points after the third round will determine the two overall champions, one from each class, who will then represent the Philippines at the Asian Regional Championship of the GR Supra GT Cup in October. A third champion also headed to the regional championship will be coming from the Celebrity vs. Media class, also happening this September.

"I feel ecstatic for the win, considering the nature of the track. I am very happy to pull another victory on a track I consider the toughest in the calendar," said Sporting Class champion Moreno.

"Unlike Suzuka, this track's nature does not have as much breathing room as it goes one corner after another. I also had to deal with how to overtake in this track considering I started in P9 and clean passes in this track are so difficult," Moreno explained.

"A child playing toy cars in a fashion that he's mindful about body roll, suspension, traction. etc. A kid waiting for cars to pass by and memorizing the brands and models, that was me. We couldn't afford to buy a car before, but videogames allowed me to dream of getting beautiful cars and to be a race car driver. This is the first time for me to enter a legit esports racing competition, and especially coming from Toyota and winning? A fulfilling experience that's what it is," said Cruz.

The GR Supra GT Cup Asia Philippines expands TMP’s motorsport activities led by the Vios Racing Festival (VRF). This year’s VRF season has been postponed due to the pandemic, but this hasn’t stopped TMP from promoting the waku- doki or heart-pumping excitement of racing.

“The GR Supra GT Cup Asia Philippines E-race is really our way to continuously give a thrilling driving experience even with our limited physical movement,” said Elijah Marcial, TMP’s vice president for marketing services. “Many people are now confined to their homes, they probably miss bringing out their cars for a road trip or track day with friends. Let us not allow this pandemic to take away the fun and excitement of driving. It’s a totally different experience, but with a virtual supra running at top speeds, a digital sound of engine revving, and a friend cheering for you in the comment box, it’s the joy of driving at a different level!”