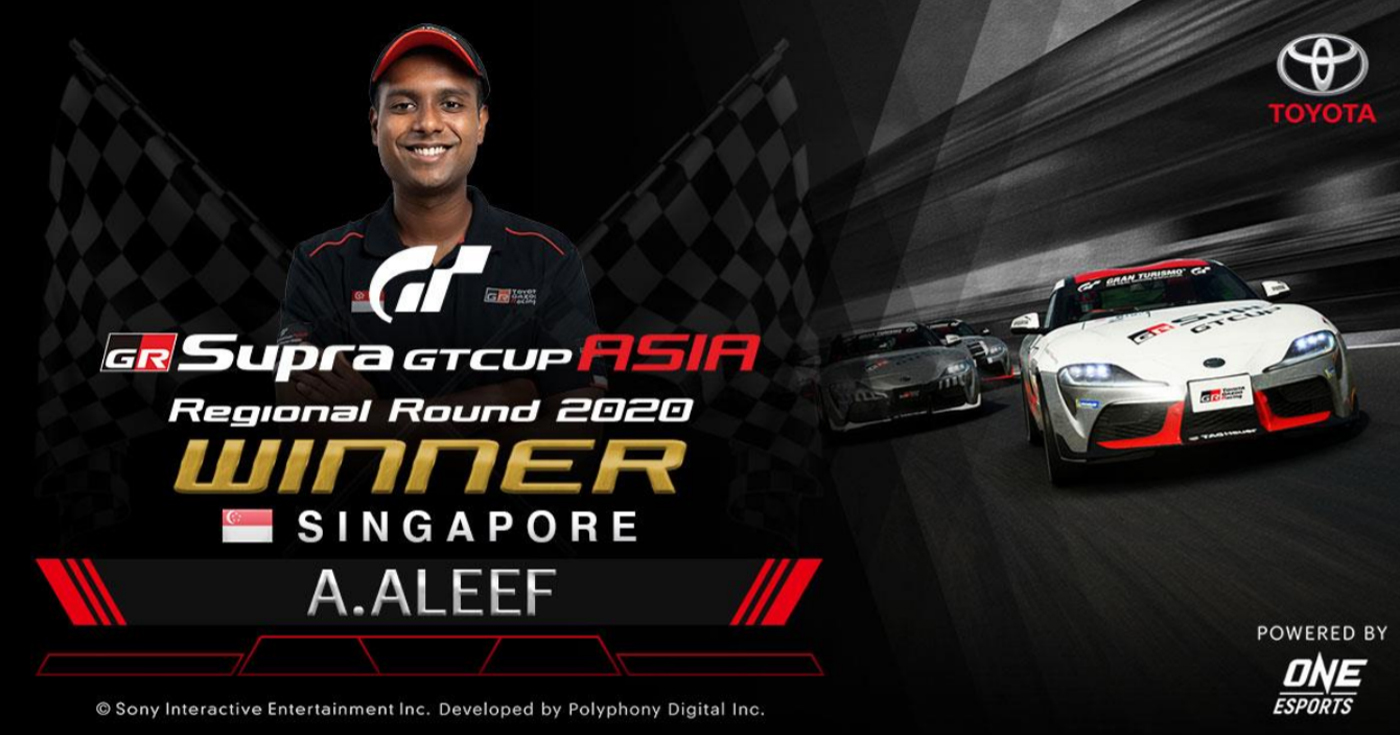 Toyota Motor Asia Pacific’s first virtual motorsport racing championship in Asia*, the “GR Supra GT Cup ASIA 2020” drew to a close yesterday on Sunday (25 October) with a thrilling finale. Fifteen challengers from five participating countries – Thailand, Singapore, Malaysia, Philippines and India, showed off the power, balance and agility of Toyota’s iconic sports car, GR Supra, by racing it online through one of the most demanding tracks in the world, the Nürburgring’s Nordschleife track in Germany. The demanding route put the car and drivers to a hard test, and finalists from Singapore, Malaysia and Thailand raced neck-to-neck in the last laps of the race.

During the final lap, Sirigaya (Thailand) successfully passed Taj Aiman (Malaysia) for the lead but was later received 1 sec penalty for his aggression. That elevated Taj Aiman back into the lead which he defended right to the end with Sirigaya crossing the finish line in second and Aleef (Singapore) taking third position. But Aleef, having won the first two races, finished three points ahead of Taj Aiman to take the overall victory.

Aleef won 6,000 USD in cash prize and a coveted spot in the global final “GR Supra GT Cup 2020,” where he will race best of class e-Motorsport challengers from around the world in December. Taj Aiman, placing second, took home 3,000 USD while Sirigaya, who came in third, won 1,500 USD. All three winners were also awarded trophies.

The exhilarating regional final was a one-make race championship in Gran Turismo Sport [PlayStation 4**]. It was a culmination of national-level virtual racing championships held across Philippines, India and Malaysia, and it also included Singapore & and Thailand participants who had qualified after taking part in the global GR Supra GT Cup competition, with the best national racers advancing to the regional final. The event has brought motorsport followers and avid gamers from all over Asia together to experience real-racing excitement with Toyota, and the national rounds reached more than 2.7 million views.

E-motorsport is one of the key pillars of TOYOTA GAZOO Racing [TGR], bringing thrill to car enthusiasts, and excitement to those looking for new challenges in the virtual world. The real-time experiences and learnings from TGR’s motorsport activities are applied to the development of ever-better cars.

The regional final comprised three races and the championship had a magnificent start at Fuji Speedway – Toyota’s home ground and a place where it has won many victories in motorsport history. With some of the best simulation racers from Asia racing the legendary GR Supra, e-Motorsport and gamers were kept on the edges of their seats. Aleef finished first with a strong 6-second lead, and he was followed closely in second and third place respectively by Suji (Malaysia) and Taj Aiman.

The second race was an incredibly exciting five virtual laps through the night “Shuto” expressway of Tokyo. Lap five had one of the most exciting scenes of the race with Suji, Tanapat (Thailand) and Shaz (Singapore) racing three-wide through the long straight to compete for P7 in a one lane turn. But it was Aleef who once again finished with a strong first place, followed closely by Sirigaya. Lallave (Philippines) came in third, just one second behind Sirigaya.

Nürburgring was the last track raced in the regional final. It runs over 20km and has more than 150 turns, mandatory pitstop and tire change. After three intense laps, Taj Aiman came in first with an incredibly close second from Sirigaya and Aleef in third.

The winners of the regional final were determined by their total points at the end of the competition. Aleef had the highest score of 36 points, while Taj Aiman came second with 33 points, and Sirigaya was in third with 25 points.

Speaking on his successful win, Aleef said, “I am very excited and honoured to be the first ‘GR Supra GT Cup ASIA’ champion, and I look forward to bringing my best game to the global final and making all Singaporeans and Asians proud. It hasn’t been an easy race for me as I was up against many other fast drivers. There were also many levels of races leading up to the regional final. But I am glad my efforts paid-off. It was quite exciting racing the legendary GR Supra and being part of this journey with TGR and e-Motorsport fans and gamers. I would like to thank Toyota [regional and national teams] for giving me this fantastic opportunity.”

On the success of the “GR Supra GT Cup ASIA 2020 [Regional Round],” Vice President of Toyota Motor Asia Pacific, David Nordstrom, said, “The ‘GR Supra GT Cup ASIA’ is a feat made possible by the power of passion, cars and limitless possibilities, and we were happy to share the thrill of the regional final with e-Motorsport fans and racing enthusiasts. The regional finalists were all incredible players and they made us feel the exhilaration of racing the iconic GR Supra on some of the most amazing racetracks around the world. Congratulations again to all the winners, and I wish Aleef all the best in the ‘GR Supra GT Cup 2020’ global final.”

Aleef will represent Asia and compete with world players at the “GR Supra GT Cup 2020” global event to be held this December [for more information about the global event, please click here.

** “PlayStation” is a registered trademark of Sony Interactive Entertainment Inc. “PS4” is a trademark of the same company.